Gen Del Raye (fiction) is half Japanese and was born and raised in Kyoto, Japan. He received an MFA from Hamline University and his work has appeared in The Best Small Fictions 2017, The Monarch Review, and others. He is the winner of the 2018 Force Majeure Flash Contest, the 2018 Up North Poetry Prize, and the 2018 Great Midwest Poetry Contest.

Claudette Webster (poetry) is a poet/nonfiction writer living in Minneapolis. She has received fellowships from Cave Canem Fellow and North Country Institute and Retreat for Writers of Color. Her work has appeared in Essence, Pitkin Review, and Black Renaissance Noire. She earned an MFA in Creative Writing from Goddard College. She is currently working on a memoir about her family’s journey from Jamaica to America.

Patti Kameya (nonfiction) is a historian escaped from the Los Angeles suburbs. She now forages wild plants and treats historical amnesia in Saint Paul. At the Loft she participated in the January 2017 VONA Voices workshop, and taught a class "Your Story and Historical Context" in August 2018. Her story "Community and Kickboxing in Saint Paul" appears in Saint Paul Almanac: Resistance and Resilience Vol. 12.

Michael Garberich (fiction) works in privacy and information security in Minneapolis, and writes short fiction in the evenings and on weekends. Raised in Minnesota, he was born in Seoul, South Korea.

Gretchen Marquette (poetry) is the author of May Day (Graywolf Press, 2016). Her poetry has appeared in Poetry, Harper's, the Paris Review, Tin House, PBS Newshour, and elsewhere. She was a 2014 recipient of The Loft Literary Center’s Emerging Writer Grant and a 2017 artist-in-residence at The Anderson Center in Red Wing, Minnesota. Her first book was nominated for a 2017 Minnesota Book Award in poetry. She lives in Minneapolis.

Melissa Febos (nonfiction) is the author of the acclaimed memoir, Whip Smart (St. Martin’s Press 2010), and the essay collection, Abandon Me (Bloomsbury 2017), which was a LAMBDA Literary Award finalist, a Publishing Triangle Award finalist, an Indie Next Pick, and was widely named a Best Book of 2017. Febos is the inaugural winner of the Jeanne Córdova Nonfiction Award from LAMBDA Literary and the recipient of the 2018 Sarah Verdone Writing Award from the Lower Manhattan Cultural Council. She has been awarded fellowships from the MacDowell Colony, Bread Loaf Writer’s Conference, Virginia Center for Creative Arts, Vermont Studio Center, The Barbara Deming Memorial Foundation, The BAU Institute, and Ragdale. The recipient of an MFA from Sarah Lawrence College and an associate professor and Graduate Director at Monmouth University, her work has recently appeared in Tin House, Granta, The Believer, The Sewanee Review, and The New York Times. She lives in Brooklyn.

Gretchen Marquette
Gretchen Marquette earned her MFA in poetry from Hamline University, where she served as the assistant poetry editor for Water~Stone Review. Her work has appeared in Harper's, Tin House, Poetry, the Paris Review, and other places. Her first book, May Day, was released by Graywolf Press in 2016, and
Read Full Bio 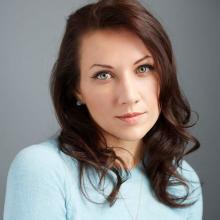