Event
Sense of Adventure: Monsters and Creatures with Matthew Kessen

As part of the Loft's Sense of Adventure theme, we'll have a theoretical conversation around the foes and obstacles in many adventure stories: monsters and mythical creatures.

The monsters and creatures the audience can choose for this activity are: Wyvern, Kappa, Bigfoot, Mokele-mbembe, Thunderbird, Gryphon, Girtablilu, Penanggalen, Bunyip, Wendigo, Unicorn, and Medusa.

Unable to attend the live event? As long as you pre-register, you can access the recording after it airs. 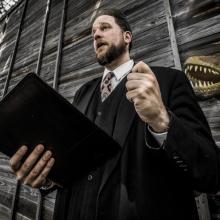 Matthew Kessen
Matthew Kessen is a writer, actor, dramaturg, and producer who has worked with Comedy Suitcase, Green T Productions, Fearless Comedy Productions, the Winding Sheet Outfit, and many other companies besides. He is best known for his ongoing series of solo shows, "Reverend Matt's Monster Science,"
Read Full Bio