Leanne Betasamosake Simpson is a renowned Michi Saagiig Nishnaabeg scholar, writer, and artist, who has been widely recognized as one of the most compelling Indigenous voices of her generation. Her work breaks open the intersections between politics, story, and song—bringing audiences into a rich and layered world of sound, light, and sovereign creativity. Working for two decades as an independent scholar using Nishnaabeg intellectual practices, Leanne has lectured and taught extensively at universities across Canada and the United States and has 20 years experience with Indigenous land based education. She holds a PhD from the University of Manitoba and teaches at the Dechinta Centre for Research & Learning in Denendeh. Leanne is the author of seven books, including her new novel Noopiming: The Cure for White Ladies (US release from UMP February 2021), which was named a best book of the year by the Globe and Mail. This Accident of Being Lost won the MacEwan University Book of the Year; was a finalist for the Rogers Writers’ Trust Fiction Prize and the Trillium Book Award; was long listed for CBC Canada Reads; and was named a best book of the year by the Globe and Mail, the National Post, and Quill & Quire. As We Have Always Done: Indigenous Freedom Through Radical Resistance was awarded Best Subsequent Book by the Native American and Indigenous Studies Association. A Short History of the Blockade: Giant Beavers, Diplomacy and Regeneration in Nishnaabewin was published by University of Alberta Press in February 2021, and her new project, a collaboration with Robyn Maynard, Rehearsals for Living is forthcoming from Knopf Canada in 2022. 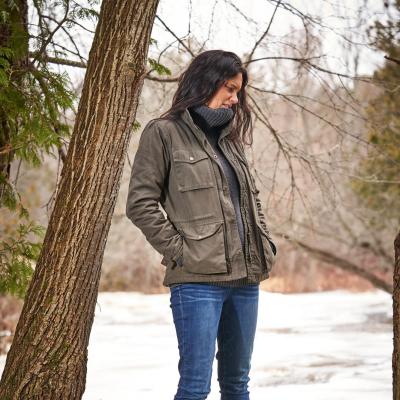