Michelle Myers is an award-winning poet, community activist, and educator.  Born in Seoul, South Korea to a Korean mother and a white American father serving in the United States Air Force, she draws from her personal experiences as a biracial Korean American woman to write poetry that challenges mainstream misconceptions of Asianness and explores the intersections of race, culture, gender, community, and self.

A professional spoken word poet for almost two decades, Michelle has featured at hundreds of college campuses as well as at many distinguished venues around the country, including the Kennedy Center, the BAMcafé (Brooklyn Academy of Music), the Bowery Poetry Club, the Asian American Writers Workshop, the Sierra Arts Foundation, the Japanese American National Museum, and the Wing Luke Museum of the Asian Pacific American Experience.  As a founding member of the Asian American female spoken word poetry group Yellow Rage, she was one of the first Asian American women to appear on HBO’s Russell Simmons Presents Def Poetry; in the first live Def Poetry Jam show presented at the 2001 HBO U.S. Comedy Arts Festival in Aspen, Colorado; and in the Def Poetry Jam College Tour. As a solo artist, Michelle has been the recipient of numerous grants and awards, including a Transformation Award (2014) and an Art and Change Grant (2011) by the Leeway Foundation and a Spoken Word Immersion Fellowship First Alternate (2018) and Honorable Mention (2014) by The Loft Literary Center. Michelle’s poetry also informs her work as an educator at Community College of Philadelphia where she has received recognition, such as a 2018 President’s Award for Excellence in Service to the College; a 2016 President’s Award for Excellence in Fostering Student Success; a three-time Mid-Atlantic Emmy Nomination for the Drop the Mic Spoken Word Poetry Competitiontelevision program that she hosts and co-created; and a 2010 Student Club Advisor of the Year Award (Spoken Word Poetry Club).

Employing multiple poetic forms and delivery styles—including narrative, folk arts/storytelling, hip-hop-influenced rhyme, and song—Michelle attempts to employ the raw and intimate power of spoken word poetry in the hopes of taking audiences on an unforgettable journey that educates, challenges, and inspires. She believes in the transformative power of spoken word poetry. 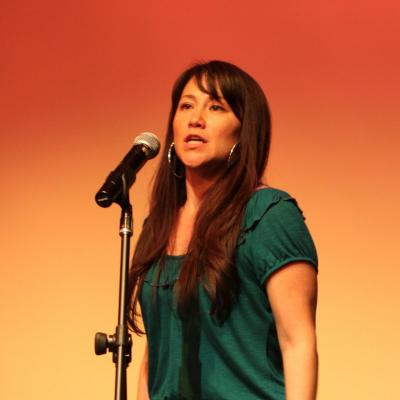