V.V. Ganeshananthan’s debut novel, ​Love Marriage​, was longlisted for the Orange Prize and chosen one of Washington Post Book World’s Best of 2008, as well as a Barnes & Noble Discover Great New Writers Pick. Her work has appeared in ​The Washington Post​, ​The New York Times​, Columbia Journalism Review​, and ​The Atlantic​, ​among others.​ A recipient of fellowships from the National Endowment for the Arts, the Radcliffe Institute for Advanced Study at Harvard, and the American Academy of Berlin, she has been visiting faculty at the University of Michigan and the Iowa Writers’ Workshop. She presently teaches in the MFA program at the University of Minnesota. She is at work on a second novel, excerpts of which have appeared in Granta​, ​Ploughshares​, and ​Best American Nonrequired Reading 2014​. She co-hosts the Fiction/Non/Fiction podcast at Literary Hub.

Photo: Annette Hornischer, courtesy of the American Academy in Berlin 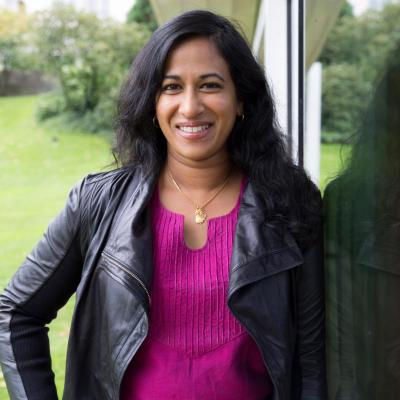